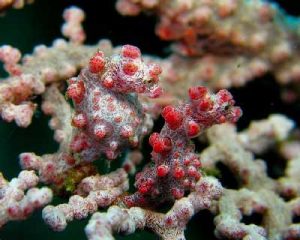 The pygmy seahorse consists of several species of tiny seahorse in the syngnathid family or Syngnathidae (seahorses and pipefish). Family Syngnathidae is part of order Syngnathiformes, which contains fish with fused jaws that suck food into tubular mouths. They are found in Southeast Asia in the Coral Triangle area. They are some of the smallest seahorse species in the world, typically measuring less than 2 centimeters (0.79 in) in height.

The first pygmy seahorse known to science was Hippocampus bargibanti. At least six more species were named after 2000. The first species discovered lives exclusively on fan corals and matches their color and appearance. So effective is a pygmy seahorse’s camouflage that it was discovered only when a host gorgonian was being examined in a laboratory. In 1969 a New Caledonian scientist, Georges Bargibant, was collecting specimens of Muricella spp gorgonians for the Nouméa museum, and whilst one of these was on his dissection table he happened to notice a pair of tiny seahorses.

The next year they were officially named by Whitley as Bargibant’s pygmy seahorse. Other species live on soft corals or are free-ranging among seagrasses and algae. It is very difficult to spot amongst the sea grasses, soft corals, or gorgonians (sea fans) that it inhabits.

Other distinctive pygmy seahorse characteristics include a fleshy head and body, a very short snout, and a long, prehensile tail. With their short snouts, they have the appearance of baby animals. 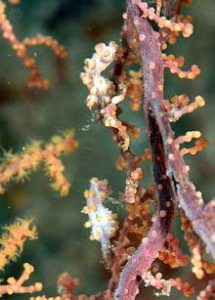 Pygmy seahorses are 14–27 millimetres (0.55–1.06 in) long from the tip of the tail to the end of the snout, so that their vertical height while swimming is still smaller. An adult may be as small as 13 millimetres (0.51 in) long. True pygmy seahorses have distinctive morphological markers.

Unlike other seahorses, they have a single gill opening on the back of the head, instead of two on the sides. Males brood their young in a pouch on their trunk.

Males and females are distinguished by openings at the bottom of the trunk: females have a tiny, raised round pore for extruding eggs and males have a fore-and-aft slit for accepting them. 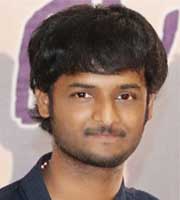