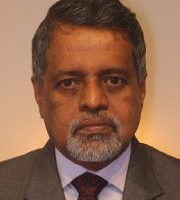 Professor Upali S. Amarasinghe’s research career commenced in 1980 when he started research on limnology of major perennial reservoirs of Sri Lanka. His research was aimed at developing effective management strategies for the fisheries in reservoirs of Sri Lanka. So far, he has published over 150 research papers, edited 09 monographs and presented over 75 scientific communications in international and national conferences. He serves as a member of the editorial boards of Asian Fisheries Science and Sri Lanka Journal of Aquatic Sciences. He also served as a member of editorial board of the Journal of National Science Foundation.

In July 2010, he was awarded Doctor of Science (D.Sc.) by Bangor University, U.K. for his research on the management of tropical small-scale fisheries. In November 2019, he was awarded an honorary D.Sc. by the University of Ruhuna in consideration of his knowledge and distinguished contribution rendered to the field of fisheries biology.

He was a member of the working party of experts on inland fisheries in the Indo-Pacific Fisheries Commission of Food and Agriculture Organization of the United Nations. He also served as an international consultant to the IDRC, Canada, FAO and UNIDO. Professor Amarasinghe also served as a consultant to the Network of Aquaculture Centres in Asian-Pacific (NACA) in Bangkok and to the ICEIDA, Iceland.

So far, he has trained 41 postgraduates, including 11 Ph.D. degrees, 16 M.Phil. degrees and 14 M.Sc. degrees. Presently 05 students are reding for postgraduate degrees in the Universities of Kelaniya, Wayamba and Ruhuna under his supervision.

He was the recipient of several national and international awards for his research. He was awarded the Third World Academy of Sciences (TWAS) prize for the best young scientist in biology in 1993 for his research on inland fisheries. In 2008, Committee of Vice Chancellors and Directors (CVCD) excellence award for the most outstanding scientist in biological sciences was awarded to him. SLAAS awarded him the GRC Award in 2009 for the most outstanding scientist in biological sciences. He received Presidential awards for the authorship of scientific papers figuring in Science Citation Index. He was a visiting academic at the Imperial College of Science, Technology and Medicine, University of London in 2000. He was also an academic visitor in the Netherlands Institute of Ecology in 2007. He is a Chartered Biologist of the Institute of Biology of Sri Lanka and a Fellow of the National Academy of Sciences of Sri Lanka.