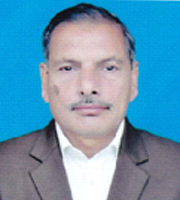 After completion of M.Sc. Zoology from Punjab University Lahore he started his service in Provincial Government Fisheries Department as Fisheries Research Assistant in 1981.  Since then and up to November 2009 he has worked in this department in various capacities and at various places with diversified duties. He has worked as Fish farm and Fish Hatchery Manager, Project Manager(RAS in Saudi Arabia) as well as in Pakistan,  Trainer, Researcher, with active  involvement in Research Project Formulation and Execution(nutrition, feeds and feeding, Fish Genetics, Health and Disease Management) Preparation of budget Proposals and Finance Management. During this period he enjoyed positions of Assistant Director Fisheries and Deputy Director of Fisheries. While staying in Provincial Fisheries department he completed his Ph.D. in Biological Sciences in 1992 with specialization in Fish Nutrition from University of Rhode Island USA.  After 28 years of service in Provincial Fisheries Department he joined University of Veterinary and Animal Sciences Lahore in November 2009 as Associate Professor and was appointed as Chairman/HOD of Fisheries and Aquaculture Department which he served up to 2015. He was selected as Professor in 2011 and appointed as Dean Faculty of Fisheries and Wildlife in October 2013 for three years. When he joined University this faculty was awarding only B.S. Fisheries and Aquaculture Degree having 60 students in all the running four semesters at one time, now we have 5 undergraduate degrees viz. B.S. Fisheries and Aquaculture, Zoology, M.Sc. Zoology, Botany, Wildlife Management with M.Phil., and Ph.D. in all these disciplines  with number of students exceeding 600. During this brief period at University he won 4 Competitive Research grants (value Pak. Rs. 20 million), produced 5 Ph.D. students, and several M.Phils. He attended and organized several national and international conferences with organization of a mega event International Fisheries and Aquaculture Symposium on 8-9 February 2017 where about 15 international speakers presented their papers with several national speakers. He has published 76 papers in National and International Journals and authored 4 books and serving as Reviewer of several National and International Journals.